UTA Artisan Award
We are happy to announce that UTA (United Taxidermy Association, USA) have offered to give their Artisan Award to the taxidermist who wins “Competitors Choise Best of Show”. It’s a very big honor to receive this Award.

Ken Walker is the UTA International Representative and he will hand over the Award at the prize giving ceremony on 13th February.
Below some more info about UTA and Ken Walker. 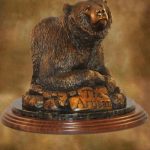 We intend to do this by uniting taxidermists and promoting the highest standards of the taxidermy art, advocating and supporting the conservation of wildlife, working in collaboration with individuals, organizations, the private sector and government agencies’, forming strategic alliances and promoting information sharing, monitoring, tracking and supporting legislation that advances and secures the art of taxidermy and most importantly, providing education and training services regarding all aspects of the art of taxidermy including providing a variety of technical services to taxidermists, state associations and others who share a passion and love of the art of taxidermy.

Our vision is to unite, promote and champion the needs of taxidermists and those that support and strengthen them.

Ken is the perfect ambassador for taxidermy. We knew that back in 2009 when he was a board member of the UTA. If you blow off the dust from our inaugural Artisan Magazine and flip to page four, you’ll see Ken Walker’s modest bio.
Ken Walker – (UTA International Representative)
“Ken Walker dropped out of high school in order to become an apprentice taxidermist. Later, he went to a taxidermy school in Norway for one year. He has been a professional taxidermist for over thirty years. Taxidermy is his main profession.
Ken belongs to Safari Club International (SCI), United Taxidermist Association (UTA), National Taxidermists Association (NTA), Wilmore Wilderness Association, and Northern Alberta Chapter of SCI. He has been a board member of both the UTA and the NTA. Ken has worked at the Smithsonian doing taxidermy and has been an outfitter in Alberta and has the experience of doing business over international borders. His hobbies are hunting, fishing, and music. The most important skill that he brings to the UTA board is communications, education, and creative thinking. Ken has volunteered in 4-H work and doing security during concerts. Ken serves the taxidermy industry by judging competitions, giving seminars, writing articles, and answering questions on the internet. He is a master taxidermist and gives freely of his knowledge to anyone who asks.”
—
Ken Walker is a creative genius. He has a reputation for doing recreations of rare or extinct animals. He received two of his three World Championship titles for recreations, a Giant Panda in 2003 and an Irish Elk in 2005. He took 3rd in World for his Sabertooth Cat in 2001. His Sasquatch recreation in 2015 brought him more fame and notoriety, and a starring role in Big Fur.

But his most well-known creation, a sculpture, may only be known to a select few. If you were ever honored to win the coveted Artisan Award, you’d soon realize its origin. The UTA ‘Bear’ was sculpted by non-other than our very own Ken Walker. The ‘True Taxidermist Prize’ is his gift to the industry and the United Taxidermist Association.
Ken Walker has given the UTA a lifetime of service in just a few short years. It is for this reason that we are honored to present Ken Walker with an Honorary Lifetime Membership.
Thank you Ken!